Vietnam’s central city of Da Nang has been chosen to host the first World Performing Arts Festival in 2018. The decision was made by the International Theatre Institute (ITI) at its 35th World Congress held recently in Spain. The festival will help raise the position of Vietnam’s performing arts. 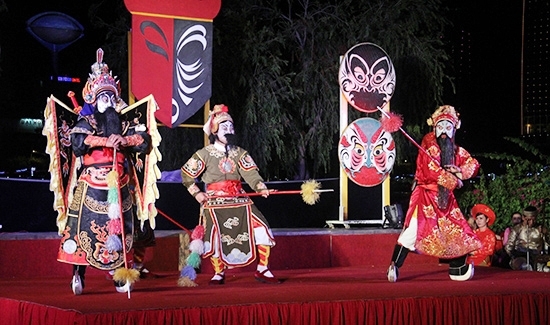 At the congress, Vietnamese director Le Quy Duong was elected to the ITI Executive Council and Vice President of the International Festival Forum’s Executive Board.

However, the country’s performing arts sector is facing numerous questions in regards to further developing traditional art forms in today’s context, such as how to blend traditional stage features with creativity in order to produce more stage works which can be performed on the world stage? How to enhance the qualification of Vietnam’s stage artists so that they are qualified to attend international stage projects?

In this context, the ITI and the International Festival Forum have proposed many practical action plans in the 2017-2020 period which increase the presence of people in stage activities and international stage festivals, and encourage stage artists to become bridges linking countries worldwide.

The first World Performing Arts Festival in 2018 will be held on the occasion of the 70th founding anniversary of ITI (1948 – 2018). The event will then be organised every two years between the ITI World Congress.

It aims to honour creativity in arts as well as the the role of the ITI and the International Festival Forum in connecting state artists and promoting their works internationally. It also seeks to imbue the world’s stage with human value.

Da Nang city is fully equipped with the necessary conditions to host major international events, particularly cultural, arts and sporting events, entertainment and tourist activities. Located in the central region of Vietnam, Da Nang is bestowed with favourable natural conditions with beautiful beaches, spectacular mountains, and friendly people. Despite experiencing tremendous losses during wartime, the city has recovered and developed significantly. With an improved infrastructure and traffic system, the city has attracted a large number of investors from both home and abroad.

These are some of the reasons why the city has been selected to host the first World Performing Arts Festival. The performing arts should be featured in a place which is brimming with aspiration, has a rosy future and home to passionate people so that the art form can fully represent its characteristics of connecting countries, peoples and civilisations for a better world.

Despite these advantages, Da Nang also faces certain obstacles in hosting the event as it has only a few theatres of international standard and the city residents have not yet developed a taste for the performing arts.

The first World Performing Arts Festival will provide an outlet for Vietnamese audiences to enjoy world class stage acts from around the globe while introducing excellent stage works of Vietnamese art troupes to international friends, contributing to boosting the development and international integration of Vietnam’s performing arts.